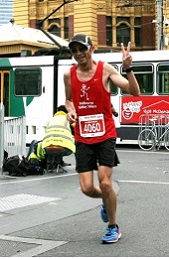 Nickname: Marbles
Vital statistics (2013): Born: 17/03/1971, Height: 181.5cm, Weight: 59.5kg
Family: Married to Mei (affectionately SWMBO) with 2 kids (Lachlan 4 and Cassandra 3).
Interests outside running: Family and friends, food, reading, sports (especially motorsports, tennis, soccer and golf).
Why I started running: Try to lower my cholesterol after being told I was a heart attack waiting to happen.
First joined the Midday Milers: Sept 2012 (best thing I ever did for my running).
Running highlight: Running my BQ time at the 2013 Melbourne Marathon as it was a 33 month journey punctuated with a list of setbacks long enough to rival War and Peace (see race report).
Running lowlight: 2012 Melbourne Marathon when I had to crawl up Linlithgow Avenue on all fours.  Thankfully I unknowingly avoided the pink slipper by not quitting.
Favourite running shoe: Close contest between Adidas Adios 2 and Adios Boost.
Favourite area for training: Tan, Lilydale-Warburton Rail Trail.
PB’s: Tan: 15:07 (2012), 5 km: 19:45 (2012), 10 km: 42:08 (2013), Half marathon: 91:20 (2013), Marathon: 3:14:01(2013).
Any pre-race superstitions: Empty as much rubbish from my body pre-race as possible.
Favourite food: Chocolate (by the tonnes), steak, all food Japanese and Asian, and more chocolate.
Favourite drink: Double strength lattes never go astray.
Most admired sportsperson: Hard to say as I admire a few. Probably Sir Roger Bannister and John Landy for smashing the seemingly-impossible sub-4min mile barrier, and then simply moved on with their respective life as if it was just a trivial matter. Their humility/grace (in victory and defeat) and perspective in life is hard to find these days.
Favourite movie: All running movies (unbreakable, spirit of marathon, prefontaine, etc), and action movies (preferably with Charlize Theron in them such as the Italian Job).
Dream occupation: Professional runner or F1 driver (I have more chance of being an astronaut).
Three things on your bucket list: Sub 3 at Boston Marathon, Transvulcania (84k ultra in Palma, Spain), be able to retire by 50 and train full time.
Most important thing to me: Things that can’t be bought. Family, friends and happiness.