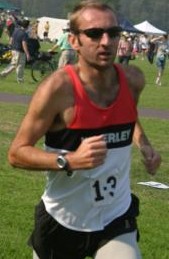 Nickname: House
Workplace: NAB
PB’s: Marathon: 2.25.28 Lake Kawaguchi (Japan) 2009, Half-marathon: 69.58 Noosa 2009, 10km: 31.54* Sandown Skins 2008, Tan: 11.29 2009
Best Running Experience: Although winning Phuket and King Island were great, the feeling in Boston around marathon time is unsurpassed and I would recommend this race to anyone. Breaking 2.30 in a marathon for the first time was amazing too, and not something I was sure I could ever achieve.
Worst Running Experience: Gold Coast Half 2007. Battling ITB issues after taking a break post Boston marathon, not only was I hobbling for three weeks after the race, but being unable to run away from the Job, I had to put up with his incessant banter with other competitors and the crowd. Very little of this fell into the category of “sparkling repartee” or “champagne comedy”. My fellow travelling companions will also attest to the nasty post race bowel issues I encountered.
Racing Shoes: Nike LunarRacer. Best shoes ever!
Years Running: Always played a lot of ball sports that involved running but took it up seriously in 2005. 21/10/2005 was my first sub 14 tan! (13.56).
Why Do You Run: It balances out my eating and drinking and it’s a great excuse to travel. I also really enjoy the social aspect of catching up with the group most lunchtimes – it gets me through the working week.
Favourite Training Session: The MMM relays – not a training session as such but very beneficial. I always seem to run really good times shortly after competing in these plus they’re just really great days. Even when GG comes back from the bottle shop with Toohey’s Gold Cans.
Hobbies: Poker, eating, drinking, travel, movies, The Pies.
Most Important Thing To Me: My health.
Biggest Dislike: Slow runners who insist on starting at the front of large fields. Competitors who wear earphones. Races that don’t start on time.
Favourite Movie: Anchorman: The Legend of Ron Burgundy.
Favourite Music: Counting Crows.
Favourite Food: Love a good classy degustation at a fine restaurant but if we’re keeping it simple, it’s hard to go past a Calabrese pizza! Have also been known to attend the odd buffet.
Favourite Drink: Chocolate milkshake.
Favourite Event: The Phuket Marathon. There are few better places at which to rehydrate post-race.
Dream Occupation: Sports commentator.
Most admired athlete: Not sure whether she’s my favourite or most admired athlete but my favourite sporting moment is Kerryn McCann’s Melbourne Commonwealth Games victory.
Life Highlight: Most of them are probably running-related so for something different I’ll go with shooting a four under par 68 on Royal Melbourne’s West Course (at a time when I probably should have been at an Accounting 1A lecture).
What 3 people would you invite to dinner (and what would you cook for them): Nathan Buckley, Craig Alexander and Steve Moneghetti. I think take away would be involved as I don’t really cook. Also, honourable mentions go to: Angelina Jolie, Dennis Commetti, Chrissie Wellington.
Three Things You Want To Do Before You Die: From a sporting perspective they would be 1. Qualify for the Hawaii Ironman. 2. Break 2.20 for a marathon. Don’t think it’ll happen though. 3. Play golf at Augusta National.
Favourite Quote: At the risk of pumping up the lycra-clad brigade, a quote seen on an Ironman competitors t-shirt, “Oh, you run marathons, how cute”, is not bad. (Even though we runners know that most triathletes are actually walking by the time they get to the third leg of their races).