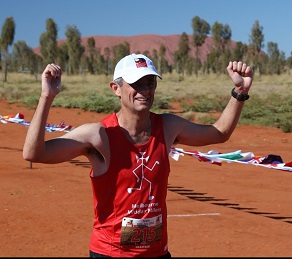 Nickname:  Rosco
Workplace:  Release Manager at Health Technology Solutions (Department of Health & Human Services)
Interests:  Pottering around the house
PBs:  Tan – 14:05;  5km – 19:11;  10km – 39:39;  Half Marathon – 1:29.28;  Marathon – 3:09.59.  I haven’t had a PB since 2014.
First Joined Milers:  May 2013
Best Running Experiences:  Running my PB in the Melbourne Marathon of 2013 and placing 3rd in the Outback Marathon of 2014.  These were the glory years for me and I have never been able to get back to those dizzy heights.
Worst Running Experience:  Unbeknown to me at the time, trying to run with DVT and blood clots in both lungs (Pulmonary Embolism).  Running started to become very hard and I was getting breathless on runs that used to be easy.  It got to the point where I had to take regular walking breaks or stop.
Years Running:  Hard to say, but I have run at various stages throughout my entire life starting with Little Athletics in the 1970s.  My most serious running years were the 6 years from 2011 to 2016 (11,946.1 km).  I think it is fair to say that I was at my best as a runner during this period (in my middle age) than at any other time in my life.
Career Prize Money:  None, but received a set of Aboriginal Rhythm Sticks for finishing 3rd in the Outback Marathon.
Favourite Training Session:  Descending Set
Favourite Place to Run:  I love variation, but anywhere by the water (beach, river, lake or creek).
Stable:  Run GMC (Xmas).  He got me back into running in 2011 and helped me train for my first marathon.  He has me covered on all distances except the marathon…..
Any pre-race superstitions:  Never lay racing gear out, take a photo and post it on social media.
Most Admired Sportspersons:  Cricket (Allan Border, Steve Waugh), AFL (Leigh Matthews, Peter Daicos), Tennis (Roger Federer, Pat Rafter, Lleyton Hewitt).
Favourite Music:  Kate Bush, Frank Sinatra, 80s music, jazz.
Favourite Song:  Boys of Summer, Don Henley (made it my ringtone)
Favourite Food:  Wood fired pizza
Favourite Dessert:  Chocolate Mousse
Favourite Alcoholic Beverage:  Red wine (usually a bold, robust shiraz)
Favourite Coffee:  Flat White
Favourite Gel Flavour:  Salted Caramel
Favourite Movies:  Star Trek, Back to the Future, Groundhog Day, James Bond movies
Favourite TV shows:  Survivor, Seinfeld, Frasier, Star Trek Next Generation/Deep Space Nine/Voyager, 4 Corners, Australian Story, Grand Designs; David Attenborough documentaries.
Favourite Quote:  “Per ardua ad astra” – Through adversity to the stars (RAAF Motto)
Most Annoying Quip from Non-Runners:  ‘Run Forrest Run’
Little known facts about me:  Served in the RAAF for 8 years and attained the rank of Sergeant.
Life Highlights:  Marriage at 21; Birth of my 3 children (2 daughters and 1 son); Interesting and stimulating careers in the RAAF, Queensland Health and Department of Health & Human Services;  2 Collingwood flags (1990 and 2010);  Running 7 marathons;  Snorkelling on the Great Barrier Reef with my wife and children in 2005;  hiking the Kokoda Track with my parents and brother in 2009 and hiking the Inca Trail with my brother in 2012.  Hopefully, many more highlights to come.
Life Lowpoint:  Diagnosed with Reactive Arthritis upon my return from Peru in 2012.  It took a year for it to settle down, but could return with the right triggers at any time.
What about those retirement rumours?:  Under serious consideration.  I have been ravaged by injuries throughout 2015, 2016 and again in early 2017 with DVT and blood clots – just as I was on the comeback trail from a stress fracture to the femur in late 2016.  It will be a long time before I can trust my body again.  Running can be a brutal sport and has many health benefits, but it has taken a toll on my body.  It may well be that I fall short of my goal of running a marathon in each State/Territory of Australia.  I would be stranded on 7 marathons with only Tasmania outstanding, but that is OK.  Health and well-being is more important.
Acknowledgements:  If this is the end of my running career, I would like to take this opportunity to thank the Milers for the most wonderful support and encouragement over the last 4 years.  I have enjoyed all of the Miler events and improved my running to levels I never thought possible thanks to the innovative, agile and nimble training program.  The camaraderie of the Milers is truly fantastic – so a huge thanks to all of the Milers for the part that you have each played to help me run PBs in 5km, 10km, half marathon and marathon distances, particularly in the glory years of 2013 and 2014.  Good luck to all in your future running endeavours.