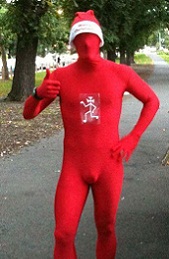 Nickname: Racer
Vital statistics (12/2012): Age: 30, Height: 182cm, Weight: 85kg
Family: Wife (Martine), Son (Malcolm – 5), 2 Daughters (Isobel – 3 and Caitlin – 8 months)
Interests outside running: Board games. Also poker, and pretty much anything to do with sport.
Why I started running: See: Weight.
First joined the Midday Milers: 2008
Most admired sportsperson: Jonathon Brown. In an era of footballers stumbling painfully from cliché to cliché without actually answering any questions, Jonathon Brown cuts through the crap and speaks his mind.
Running highlight: In primary school I was the king of ‘gang tiggy’. We would regularly have upwards of 60 kids in a single game. I peaked early.
Running lowlight: Run For the Kids 2010. Got my aspirations and ability mixed up that day…
Current goal: 2013 Melbourne Marathon.
Favourite running shoe: Adidas Adizero Adios.
Favourite area for training: Maribyrnong River Trail.
PB’s: Tan: 13:59, R4TK: 1:00:09, Half Mara: 1:25:46, Marathon: 3:04:37
Other PB’s: 57no off 21 balls batting at number 11 to win a Semi-Final with 2 balls to spare. (Went on to get pumped in the Grand Final)
Best performance ever: MilerMan does all my best work for me.
Any pre-race superstitions: I like to arrive at the last minute, unprepared, and get stuck behind thousands of walkers walking 10 abreast. I’m working on improving that.
Favourite food: Everything (See: Weight). I have a particular love of Turkish Delight Cadbury block chocolate. While watching The Biggest Loser I can pound one of those bad boys down in less than 2 minutes.
Favourite drink: 2002 Hardy’s Tintara Sangiovese (Annabella). RIP – you will be forever in my heart.
Favourite movie: Duck Soup (Marx Bros). Do yourself a favour and watch it.
Dream occupation: If I took money and work/life balance out of the equation, I’d love to be a police officer.
Three things on your bucket list: Hawaiian Ironman, Boston Marathon, and learn to play the piano.
How do you prepare for a race: Poorly
A little known fact about you: My real name is Roderick. Rory is a Gaelic abbreviation.