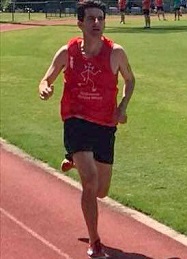 Nickname: Mostly recently ‘Robertino’, but I don’t have a Miler one.
Workplace: My own business.
PB’s: 800- 1.57 (1990), 1500- 3.52, 3000- 8.26, 5000- 14.54, 10km road 32.03 (all 1991).
Best Running Experience: I’ve travelled a lot for work, study and leisure and that’s lead to some amazing running experiences, like training with an elite middle distance squad in Seville, Spain for four months in 1994-5. If only I hadn’t been so unfit when I got there…if only I could have stayed longer…
Worst Running Experience: There have been so many in races, as I have often over-estimated my fitness level. Paying the price for trying to keep up with Pat Carroll in a corporate 6km in Sydney in 2001 stands out- I didn’t even know who he was!
Years Running: nearly four decades, with a two year injury break. I was doing school aths from 8, joined a club at 11 and by 13 was running 1500m in 4.33.
Why Do You Run?: I thought my running days were over when I had chronic knee pain a few years ago, so every run feels like a privilege these days. The focus of my year is the Vic Milers track series.
Favourite Training Session: 500m reps on the tan with the Milers, 3x 800m (6 mins rec) on the track on my own (harder than it sounds).
Hobbies: Apart from running: travel, reading novels, following the EPL. I have also been a junior soccer coach for the last 10 years. That is my excuse for not doing a long run on Sundays.
Most Important Thing To Me: Chelsea FC (just kidding!)
Biggest Dislike: Calf injuries are up there…
Favourite Movie: Grosse Pointe Blank, The Departed
Favourite Music: The Smiths, Radiohead, Massive Attack.
Favourite Food: Steak, pasta and Indian.
Favourite Drink: Coffee. I did an experiment last year and realised I could live without alcohol, but not coffee.
Dream Occupation: I would have loved to be a professional sportsman- in just about any sport.
Most admired athlete: I idolised Seb Coe when I was a kid. Thanks to his genius father, he was ahead of his time in terms of preparation (combining plyometrics, weight training, periodisation…).
Little known fact(s) about me: In keeping with the travel theme, in the late 90’s I won a 1500m race in Suriname (South America) – most people haven’t even heard of the country. I also won the 10km at the Bangkok Night Marathon in 1999. I think all the really fit people did the full and half marathon – but it was still memorable to have a police motorcycle escort along a closed motorway, as dawn broke over the city.
Life Highlight: It’s a cliché, but the birth of my first child.
Life low-point: Losing two (albeit elderly) close relatives in the space of three weeks.
Three Things You Want To Do Before You Die: Travel a lot, beat my Masters 1500m PB (4.36) and either expand my business or start another one.
Favourite Quote: “He who reaches for the sky may scale a high mountain” (I think it’s Russian).