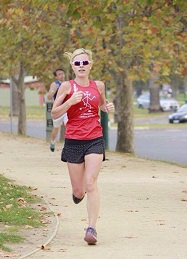 Nickname: Metric (my initial love for talking in ‘miles’)
Workplace: ExxonMobil
PB’s: Tan 15:37, 5KM 20:42, 10KM 42:28, Half Marathon 1:38, Marathon 3:35
Vital Statistics (2016): Age 42, 5 ft 4, 115 lbs, or 162.5 cm, 52 KG or 8st 3lbs
Why I started running: I ran when I lived in Chad because that was the only ‘active’ social activity. We were able to run safely inside the grounds of a French military base which had a sandy 1 KM loop inside the perimeter wall. I would meet with some other expats and run 10 KM every Saturday and then eat a lot of pain au chocolat. I was fooled into running the first ever Half Marathon in Chad. I finished in 2 hrs 12 mins. That was 2004. I didn’t really run again until my second baby was born in 2010. After she was born I felt like I needed to find new strength and I ran a half marathon 5 months after she was born to raise money for Parkinson’s disease. This was my new reason to run and I haven’t stopped since!
I ran my first marathon in January 2011 and I have now completed 12! I have raised over $25K for Parkinson’s disease. My father has been my running inspiration and I am so fortunate that I have my health to run….many others don’t have the opportunity like we have.
Running Highlights:
– Running a marathon in my home town, and being cheered by my dad in his wheelchair on the sidelines as I passed his care-home.
– Seeing my husband and girls cheering for me in any race
– New York Marathon 2013 (after race celebrations with my husband, sister and brother-in-law).
– Supported to run a PB in Melbourne Marathon 2015 with massive Miler support
Running Lowlights: Seville marathon 2016. The fittest and most prepared I have ever been and I fainted/vomitted profusely from 33km to the finish. Needless to say I was disappointed…..see my Seville race report for all the drama!
Favourite Running Shoe: Anything from Brooks
Favourite Training Session: Weekly long run (earlier the better), and 6 x 3 mins when I am travelling – you can do this session anywhere!
Any Pre-Race superstitions: Need to wear same shorts as long run.
How do you prepare for a race: Very early nights, lots of sleep before long runs. I also try and eliminate coffee and chocolate a few weeks before the marathon. I also have intolerances to fructose, sucrose, wheat and other tasty things….so I stick to my diet a lot more during marathon prep.
Hobbies: Other than running? I used to be a rower!
Most important thing to me: Health, life & family
Biggest dislike: Male politicians or leaders in positions of power who think it’s their right to be there…And have no regard for women or those less fortunate around them.
Favourite training area: Eaglemont trail in Ivanhoe or Memorial Park Houston.
Favourite food: Indian, TexMex, Irish butter & soda bread (see wheat intolerance!!).
Favourite drink: Post race Guinness, coffee every day and some Sauvignon Blanc!
Favourite movie: Out of Africa
Favourite music: Bruce Springsteen, James Taylor, John Prine, Luke Kelly, Spice Girls, Olivia Newton John, Glen Campbell and some Japanese pop music!
Dream Occupation: Vet, Race Director of New York Marathon or allocating  money for projects from large foundations !
Most admired athletes: Sonia O Sullivan, Paula Radcliffe, Kara Goucher, Eamonn Coghlan, Steven Redgrave, Matthew Pinsent, Brian O’Driscoll and Munster Rugby
A little known fact about me: I lived in Chad from 2002-2005. I rowed in a women’s 4+ and have coxed men’s and women’s 8’s (Scottish Champs 2001).
A too well known fact about me: I am the eldest of 6 girls and I am from Ireland.
Life Highlight: Birth of my children, getting married
Life Lowlight: Getting a phone call that my dad had died when I was at Heathrow airport on the way from Houston to Ireland.  I didn’t get home on time to say goodbye….the second lowlight was meeting my sister at Heathrow when she arrived from California and telling her the same…..
Three things on my bucket list: To do an Ironman, to walk the El Camino Santiago in Spain, to have the guts to go and do my dream occupation.
Favourite quote: ‘Someday I will not be able to do this….today is not that day’ – Unknown (but also my marathon mantra…I usually tell myself this a lot in the last 10 km!)