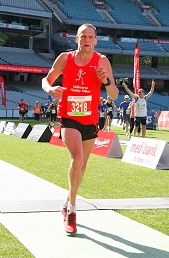 Nickname: Lurch (Dozer named me 34k into Melbourne 2011 because I was leaning crazily forward, was a pale grey, and could only respond in grunts)
Vital statistics (2014): Age: 48 Height: 181cm Weight: 70kg
Family: Yes
Interests outside running: Family, martial arts, food
Why I started running: Originally: when aged around 14 mainly XC / track because I was ok at it and it was less painful than rugby. Now: personal development and to stay fit.
First joined the Midday Milers: June 2010, Smoothy introduced me to 10 x Airlie as one of my first sessions and it taught me quite the lesson about pacing!
Running highlight: Won’t talk about the real highlights of my youth; too long ago and slightly depressing to remember. Since returning to running as an adult definitely finally running my first decent marathon in 7 attempts and finally achieving the sub-3 dream of my childhood: 2:58:04 at Melbourne 2012. So pleasing to get the mark, but even more so to do it at home running first half with Rog, with the support of our great Miler’s club and my family unexpectedly at the finish (daughter’s birthday)!  Thanks to AL and then Dozer for their guidance.
Running lowlight: Melbourne marathons 2010, 2011 going through halfway in 87/86 and having the wheels fly off at 30/32 k. Track seasons 2012, 2013 – I’m done.
Favourite running shoe: Regular training: Nike Free 3.0 v3 (can’t get them anymore, v4s were rubbish and v5s only ok), Skechers Go Speed/Go Run2, Long runs: Inov8 Bare X-Lite 150 / Skechers Go Bionic (0 drop), Track spikes: Adidas Adizero Cadence.
Favourite area for training: Tan, Goschs, Eaglemont, Collingwood Track, Albert Park Lake, Princes Park
PB’s: Tan 13:14; 5k 17:41 *; 10k 37:01 * (v soft given 36:58 10k split at Ballarat 2012); 15k 55:53 (Ballarat 2012), Half marathon 1:21:29 *; Marathon 2:58:04. * = age group rather than lifetime
Best performance ever: 800m 1:59.7
Any pre-race superstitions: No, but pre-race or long run I always have: fruit juice, a strong coffee, two crumpets with honey and a banana. I avoid alcohol for a week before important races as seems to impact focus / effort.
How do you prepare for a race?: Annoy wiser and much more accomplished Milers with lots of questions and requests for advice. Struggle with long tapers mentally, and also got sick on the Wed before Gold Coast 2012 (when I think I was in much better shape than for my pb a few months later at Melb).
Most admired sportsperson: Gebr, Tsegaye Kebede, Rob De Castella, Steve Ovett, Daniel Komen (Two mile WR 7:58.61 !!!)
Favourite food: Chinese dumplings, Beef Pho, Japanese & Pasta
Favourite drink: Beer
Favourite movie: Withnail & I (1987)
Favourite music: Joy Division / Punk
A little known fact about me: One of my prize possessions is a 5 foot 7 kg Chinese sword called a Da Dao (Grand Sabre). In a master’s hand it is a most impressive and beautiful thing, much less so in mine.
All too well known facts about you: I am 90% quad! A result of at least twice weekly runs up Victoria Peak in Hong Kong as a kid and continual deep stance work since university. Also other Milers tell me that I’m the very worst person to follow on a hot/dusty or muddy speed session. Thankfully I’m not that fast so you can just run in front of me!
Three things on your bucket list: Trail Ultra, Comrades Ultra (South Africa), Ironman
Favourite quote: “We cannot learn without pain.” Aristotle
Favourite Haiku: “To convey one’s mood in seventeen syllables is very diffic” John Cooper Clark