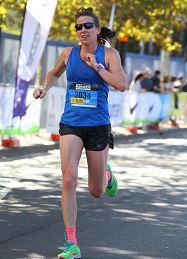 Nickname: HOPS – a very important ingredient in IPA craft beer and also known to have a few injuries over the years too.
Workplace: Very varied: I’m an Occupational Therapist, Level 2 Running coach + specialised in Run Technique (athletes/VFL/Little As). Founded Aussie Beer Milers Club in 2013, organise couple of low key events. But, much less of this since caring for my little boy who has Dravet Syndome
PB’s: 1500m 4:23 (Nationals 2012), 5000m track 16:46 (Olympic Trials), 17:23 Mooloolaba 5km road, 10000m 35:57 (Melb Marathon Festival 2012), 21km Sydney Half 1:21 – and 1:25 off the bike in Half (reckon course was short lol). 51mins for City to Surf and 5th place overall female. 3rd at Stawell Gift 1600m race (?time). Never done a Marathon, started cycling.
Best Running Experience: racing  at 2012 Vic Mile Champs after a 10 year hiatus from running, came 2nd (?time, full race youtube)
Worst Running Experience: I tried to race 9 weeks after having Joshie – don’t recommend it
Racing Shoes: Mizuno for past 6 years – loved Wave Elixir but currently in Wave Sky, Wave Shadow and some old spikes if track racing.
Years Running: Since I was 7 years old! – a long time!!
Why Do You Run: It’s in my soul, since I was little I loved to run around the ovals whilst my brother played soccer. When I started competing, I ran to win, I wanted to represent Australia. As I got older I realised running was my way I coped with a lot of things, it was my meditation and I’ve met so  many awesome people through the sport and travelled to great events.
Training Session: Track – 400s or speed session at the Tan – always inspired when I run there.
Hobbies: avid reader of Biographies, arthouse films, Music, gigs, breweries, socialising, riding MTB bike, and doing toddler related activities these days.
Most Important Thing To Me: 100% my little boy Joshie.
Biggest Dislike: bad coffee, life’s too short
Favourite Movie: Amelie that is now on par with Mystify: Michael Hutchence Film
Favourite Music: No particular genre, but ranges from Nick Cave to rock bands like Gang of Youths, Kingswood.
Favourite Food: Dark Chocolate
Favourite Drink: Wine – a good Cab Sauv, but on par I do love IPA and Sour beers – depends on the occasion.
Favourite Event: Would be a music festival, but running wise I’d have to say the Aussie Beer Mile!
Best location event: Great Ocean Road Marathon Weekend
Dream Occupation: Doing more of what I used to do with Willy VFL – so to do rehab/run technique coaching – Footy clubs have a very good set up and support within them.
Most admired athlete: Emil Zatopek – he “felt” running, he knew his splits without wearing a watch and knew how to run through the hurt, very gutsy runner. Great biography – read it!!
Little known fact about me:  I probably more of a dog person than a cat person though we own a cat.
Life Highlight: Been so many, loads of travel and squads of elite level was a great experience. Then having Joshie was a big surprise after years of racing professionally, and living like a gypsy, I didn’t think I would ever be a Mum but life’s pretty cool in that respect.
Life low-point: Being up and down, mood wise, since I was the age of 20 and at times this became more serious. But I did and still do get some good support/help. When Joshie was in ICU at 12 months old that was the lowest, most terrifying time of my life. But it gives life a whole new perspective.
Three Things You Want To Do Before You Die: Travel again – see more of Europe, and show little Joshie some cool places. Maybe, just maybe run a marathon!!!! Do Cape to Cape MTB race.
Favourite Quote: “We are all the gutter but some of us are looking at the stars” Oscar Wilde