Nickname: Errol
Workplace: Deloitte
PB’s: Not really worth talking about given the 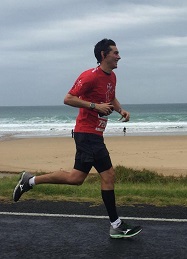 of the milers. I’ll update when I manage to break 20 mins for 5k and 3:30 for the marathon this year.
Best Running Experience: The first time I did Two Bays. What an amazing run, so good that one day I might do the 56k. I also love City 2 Surf, this year will be the 6th in a row.
Worst Running Experience: The second time I did two bays. I wasn’t as fit as I thought I was, exhausted in the last couple of k’s I managed to run into a branch resulting in a couple of stitches. (I’m pretty sure UT and ELMO both ran passed me, neither stopped to help).
Racing Shoes: A pair of Mizuno Waveriders given to me by an anonymous admirer. Happens all the time.
Years Running: I used to plod around lazily occasionally until I met Marty about 6 years ago. After a few months trying to convince me to join him and Dan for a lunch time run I finally caved in and joined them. I think by the start of 2017 I was able to actually run with them (when they were taking it easier of course) couldn’t talk when running with them until 2017, soon as I did, my running improved.
Why Do You Run: Initially to get and stay healthy but more recently I’ve realised how much I enjoy being outside running with mates.
Favourite Training Session: Any session during the taper
Hobbies: Golf, travel, food
Most Important Thing To Me: My wife, life balance.
Biggest Dislike: Inconsiderate people and people that can’t use their gamin properly
Favourite Movie: Shawshank Redemption
Favourite Music: I have a pretty eclectic taste, recently played on Spotify includes: The Music, Eminem, Adele, David Bowie, The Beatles, Jake Bugg, James Bay, Oasis and Stereophonics.
Favourite Food: Pizza
Favourite Drink: A beer or a glass of red
Favourite Event: Two Bays or City to Surf
Dream Occupation: Running my own business.
Most admired athlete: I’m blown away by the athleticism of the AFL boys. But I think it would have to be Roger Federer.
Little known fact about me: I was a very chunky kid.
Life Highlight: Very fortunate to have a few things on this list: 1. Getting married to Sarah in Tuscany in 2016 2. Moving to Australia in 2011 and never looking back 3. Spending a year backpacking around the world after uni
Life low-point: Even more fortunate not to have too many of these, so far it’s been a pretty amazing journey.
Three Things You Want To Do Before You Die: Spend a year driving around Australia with Sarah, run my own successful business, play a round of golf to level par
Favourite Quote: “Believe you can, and you are halfway there” Theodore Roosevelt and “Success is a journey, not a destination. The doing is often more important than the outcome.” Arthur Ashe