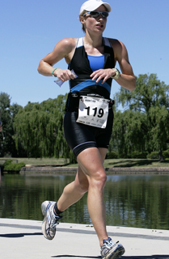 Nickname: EM, Em (and a couple of others which I won’t share)
Vital statistics (12/2012): Age: 33 (Born Nov 1979) Height: 160cm Weight: None of your business
Family: Duncan (husband), no children.
Interests outside running: The other 2 legs – swimming and riding.
Why I started running: To escape the long arm of the law …?
First joined the Midday Milers: June 2008
Most admired sportsperson: Craig Alexander, Kurt Fearnley. I loved Flo Jo as a kid.
Running highlight: 8th in the Perth City to Surf Marathon 2009
Triathlon highlight: 9:51 at Melbourne Ironman 2012 and qualifying for and competing at 2012 Hawaii Ironman World Championship
Sporting lowlight: The run of the 2010 Port Mac Ironman. My stomach wouldn’t empty so it swelled up with all the water, sports drink and gels. After a good swim/bike and 20km run, I had to shuffle through to the end, and then vomited on volunteers as I crossed the finish line. To top it off, it was caught on camera.
Favourite running shoe: ASICS DS TRAINER
Number of bikes owned: 4 – TT bike, road bike, mountain bike and commuter
Favourite area for training: The beach trails in Sorrento. Any nice bushy trail will do. Around Bright (including Mt Hotham, Falls Creek and Mt Buffalo) for cycling.
PB’S: I think 2013 will be the year for running PBs. I need new 5km, 10km, half and marathon PBs, and I should probably race the tan for the first time since 2009!
Other PB’S: Half Ironman 4:39 (Yeppoon 2012), Ironman 9:51 (Melbourne 2012)
Best performance ever: Melbourne Ironman 2012 and Grade Seven play as Dorothy in “The Yellow Brick Road”.
Any pre-race superstitions: None. I just get very nervous.
Favourite food: Chocolate
Favourite drink: Lemon squash
Favourite movie: The Hangover
Dream occupation: Housewife
Three things on your bucket list: Learn to scuba dive, climb a mountain and clean the grate on the bathroom fan (it STILL really needs doing!)
Most important thing to me: My family and friends.