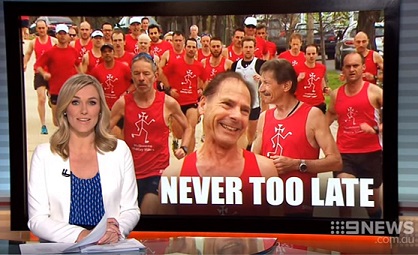 Nickname: Ed
Workplace: Managing Director at Imaco Engineering P/L. I established the company in 1969 and it has been running ever since, although these days I’m semi retired. My biggest clients have been Bluescope Steel and the Bureau of Meteorology. Success came when I won a Government Defence Contract in the mid 80’s. This contract involved refurbishing large radar equipment nationally.
How did you get to owning your own company: By the time I migrated to Australia from Germany in 1960, I was a qualified Engineer (having started my apprenticeship at 14). When I arrived, I struggled with the English language and had to do odd jobs. Eventually I secured an engineering position with BHP in Whyalla. Following that I won a position with a tin mining company in Ardlethan, NSW. On my return to Melbourne, I decided to start my own business.
First joined the Midday Milers: 2013
Years Running: I started running competitively when Katie and I joined the Malvern Harriers Athletics Club in 1997 – 22 years now.
PB’s (mostly as an O60 athlete): 15:37 100m, 23:40 5k, 37:49 M2S Lorne 8k 2007, 1:40 Half Marathon, 3:41 Two Bays 28k
Best Running Experience: Winning the O60s Athletics Victoria Winter Season Championship in 2006.
Worst Running Experience: In 1980 I signed up for the Melbourne Big M Marathon, but had to pull out at ~30k, due to blisters. Unfortunately running in Dunlop’s was the thing back then. More recently it’s been my knee injury, which is preventing me from running.
Racing Shoes: Saucony and Adidas
Why Do You Run: For enjoyment and keeping fit.
Favourite Training Session: 500s and 250s along the tan.
Hobbies: Golf, fishing and boxing with JC at Leo Berry’s gym in Richmond. I also love snow skiing, which influenced my decision in the 80’s to acquire a 50% share in a ski lodge at Mt Hutt, New Zealand. This enabled 20 good years of skiing with family and friends.
Most Important Thing To Me: Family and friendship with other runners
Favourite Movie: Midnight Express
Favourite Music: Paul Simon
Favourite Food: Pasta and steak
Favourite Drink: Shiraz
Favourite Event: Two Bays
Dream Occupation: Geologist
Most admired athlete: Moneghetti: He’s talented, has had longevity in the sport and is a nice guy.
Little known fact about me: When I was 17 I took up boxing in Germany, due to the influence of my older brother Rudi, who was the Ring Announcer. I continued boxing when I moved to Australia and competed across Victoria alongside the greats of Lionel Rose in his early career. I started at bantamweight (52kg) then eventually retired at welterweight (64kg), at the age of 23. My retiring year saw me one fight short of potentially making the Tokyo 1964 Olympics.
Life Highlight: I purchased a block of land in the early 70’s and built a holiday house (12 sided –  dodecagon) at Lake Eildon, which led to being a main feature in the Home Beautiful magazine. To build was a 7 year commitment, which included upkeep of 25 acres of property, on top of managing my business. Once built, I then established a vineyard on the land, and further built a wine cellar.
Life low-point: Being born in war torn Germany in 1942, and experiencing the hardships until eventually leaving at the age of 17. In the early years it meant nightly being forced to retreat into an air raid shelter, as bombs were persistently dropped. At the age of 7 I lost my mother to cancer. This meant the family split through hardship, and I ended up in an orphanage for some time.
Three Things You Want To do before you die:
– Travel back to Europe
– Geological fossicking, including opal digging
– Complete a marathon, maybe Medoc, in France