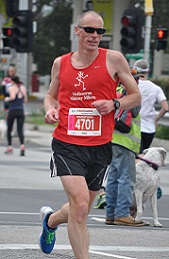 Nickname: Rog
Vital statistics (2013): Born: 25/01/1968, Height: 187 cm, Weight: 77 kg
Family: Wife Lauren and daughter Ellie. Cat Snowy
Interests outside running: Footy (Hawks), eating, holidays
Why I started running: Continually being bugged by friends to do fun runs; eventually I caved. I suspect the fact I was almost 42 and facing an increasing waistline influenced my decision. It wasn’t long and I was hooked
First joined the Midday Milers: 2012; thanks to Cans for that
Running highlight: Melbourne Marathon 2012. Was my 2nd marathon, and almost 3 years to the day that I began running. To run sub 3 hours (2:55:29) as a near 45 year old and be part of a winning MMM team was a thrill. The notion I’d even run a marathon a few years earlier was laughable.
Sporting lowlight: 1. Under 13 cricket, last over and 2 runs required with me facing. We still needed 2 at the end of the over. The wood never touched leather. Also failing to finish AV Bundoora in 2013.
Favourite running shoe: Adidas Adios 2
Favourite area for training: On and around the tan. It offers so many options in a small area.
PB’s: Tan 13:49, 5k 18:28, 10k 37:21, Half 1:23:19, Marathon 2:54:15 (I didn’t have to look any of them up; and yes I know some of them are very soft, the 5k especially).
Any pre-race superstitions: Traditionally I have Hainanese Chicken Rice from Kotaraya the day prior. I’ve recently shifted though to the Salmon Chazuke at Shyun instead or in addition to. Not really a superstition. For this year’s MM for some reason I did feel the need to use the pins form the previous year’s run.
Most admired sportsperson: Jason Dunstall. That I got to see his career was a joy; he did everything so efficiently, and with so little fanfare. Unstoppable 1 on 1 at his best. Delivered the club 2 more premierships by sticking his neck out to hire Clarkson.
Favourite food: See above. I really have a shocking sweet tooth though so I’m a sucker for chocolate, biscuits, cake and ice cream. I have a fridge at home dedicated to them. I don’t have the Marbles Tim Tam fetish though. A good lemon slice is hard to beat. Same with the snot block. Shyun in Carnegie is my favourite restaurant going around.
Favourite drink: Nothing in particular. On a nice warm day a James Squire Amber Ale, or Bintang will suffice. Pretty partial to some decent Shiraz or sav blanc as well.
Favourite movie: The Life of Brian. “I say you are the messiah, and I should know I’ve followed a few.”
Dream occupation: Anything that involves me working in sports.
Three things on your bucket list: Run an overseas marathon; golf at St Andrews, retire well before age 65 to live a life of luxury.
Most important thing to me: My family naturally. Standard answer I know. Otherwise I think I’d be hard-pressed not to say running. Even my wife has come to understand that it is something she just has to live with.