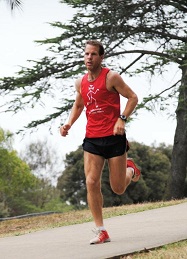 Nickname: ATB (Editor’s note: Arthur the Bruce)
Workplace: ANZ, Digital Banking Manager
PB’s: Tan 12:41, 10km 35:02, ½ Marathon 1:18:25, Marathon 2:52:16
Joined Milers: 1999
Hobbies: Orienteering. It’s actually more of a lifestyle than a hobby. Most of my weekends and holidays involve travelling to orienteering events around Australia and across the world. I met my wife at orienteering, I used to race against my brother-in-law, and my three kids have already won age group national titles. When I am not racing, I am busy in my roles as President of Orienteering Victoria, Chair of Selectors for Orienteering Australia and Event Director for the Victorian Orienteering Championships.
Years Running: I started Orienteering at high school in 1987 with my Geography teacher. I won the U13 State Schools Orienteering, and then the U13 Australian Schools Orienteering competitions in my first year in the sport, so I thought I better take up running more seriously.
Running Highlights:
– Winning a medal at the 2009 World Masters Orienteering Championships – M35-39, Sprint Distance
– Winning a stage of the 1994 Swedish O-Ringen 5-day event in M20 with 20,000 competitors across all classes
– Representing Australia at elite level at the World Cup in Japan 2000 and New Zealand 2013
– Representing Australia at the Junior World Orienteering Championships in Italy 1993 and Poland 1994
– Oceania Orienteering Champion – M35 2013, M40 2015 (Long, Middle, Sprint and Relay)
– Elite level Australian Orienteering Championship medals in Long Distance 2003, Middle Distance 2009, Sprint Distance 2011 & 2013, Relay 2003 & 2014
– Competed in over 250 National Orienteering League races for South Australia and Victoria at Elite level since 1995
– Victorian Orienteering Champion at Elite level, 3 x Long Distance (2007, 2008, 2010), 3 x Middle Distance (2004, 2007, 2008)  and 6 x Sprint Distance (2005, 2006, 2008, 2011, 2013, 2015)
– Australian Orienteering Champion – age group M20 1994, M40 2014 & 2015.
Worst Running Experience: Major knee injury in 1997 at a national selection trial event in Orange, NSW. Crossing a creek, I fell into a chasm covered by long grass, falling 2m and landing on a granite boulder with my knee. My right kneecap was smashed into 4 pieces, along with various other cuts and bruises. It was likely that I wouldn’t be able to run again.  Luckily the orthopaedic surgery went well, and with 12 months of rehab and hard work, I was back racing again.
Racing Shoes: Inov-8 X-Talon 212
Why Do You Run With the Milers:  It’s a great way to break up my working day. I spend my time before and after work with my kids, coaching their cricket and football teams or helping them with homework.  Lunch time is really the only chance I have to train. I would not have been able to motivate myself to do the speed work over many years without the Milers.
Favourite Training Session: Anything that works when attending late! I work in the Docklands, so I usually find it hard to do the session and get there and back in my lunch time, so to squeeze it in I often arrive late. The Botanical Fartlek was an old favourite, with various members specialising in “taking out” individual stages, but we’re not really supposed to run through the gardens with such a large group these days.
Most Important Thing To Me: My wife and 3 kids; Mason 13, Torren 11, Sophie 9, and of course the Adelaide Crows.
Biggest Dislike: Getting stuck in traffic. As a result I like to ride my bike to work each day. It’s faster than driving and about the same commuting time as the train, but it helps me with an additional 100km of cycling training each week.
Favourite Movie: Star Wars – all of them, and sharing them again with my kids. I saw “Episode VII: The Force Awakens” twice on opening day!
Favourite TV Shows: LOST (re-watched several times) and Survivor (all 32 seasons)
Little known facts about me: On the sporting field, I played state cricket with Jason Gillespie in the South Australian U14 team.  World Rogaining Champion 1992 Men’s Under 18 – this is a 24hr ultra-marathon style of orienteering. I haven’t done one of these 24 hour championships for many years, but my next attempt is in the M40-49 category of the 2016 World Championship in Alice Springs in July 2016.