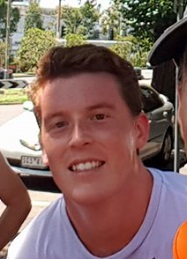 Nickname: Don’t have one yet. Firm believer that nicknames can’t be rushed.
Workplace: ANZ
PB’s: 5km (20:38); 10km (43:27); Half (1:39:04); Full (3:36:24). All will fall by the end of the year now I’m training properly.
Best Running Experience: When I travel I love running through cities to explore them. Budapest, Barcelona, and Edinburgh were all incredible to get around. While preparing for the 2016 Melbourne Marathon my sister rode her bike next to me for every Sunday session. Being able to run and talk with her as we hadn’t gotten to do so for a long time made it really special. She also had food and drinks on hand which may have played a part in me enjoying it so much.
Worst Running Experience: Melbourne Marathon 2014. As to the why:
· Only did about a third of the planned training sessions
· Had no clue about race nutrition and didn’t test anything beforehand
· Had an ITB issue five weeks before the race as I never did any recovery work
· Was still a smoker at the time.
As you can imagine it was a horrible day out. It did however spark the desire to run properly again and look after my health so I wouldn’t change that day.
Racing Shoes: Adidas Adios Boost 3.
Years Running: Did a lot of cross country and sprinting as a kid. Started running again around June 2014 but I’d only say I’ve been running properly for 2 years.
Why Do You Run:
· Like most, it clears my head and lets me switch off for a while
· Keeps me fit and active
· The people you meet are always friendly
· The amount of data it produces. Everyone has their own spreadsheets right?
Favourite Training Session: Mona/Descending Set/6 x 1km depending on how I’m feeling.
Hobbies: Running, cycling, basketball, eating, and Netflix on rest days.
Most Important Thing To Me: My family and friends are obviously my top priorities. Maintaining my health to ensure I’m sharing time with them is part of that.
Biggest Dislike: People who:
· litter
· stop suddenly on the footpath in front of you
· don’t indicate when driving
· won’t try new things
· … I could go on for days.
Favourite Movie: Empire Strikes Back, Back to the Future, Guardians of the Galaxy, Grand Budapest Hotel, Terminator 2, Forgetting Sarah Marshall, Crazy Stupid Love. Plenty more to choose from.
Favourite TV Shows: The reason I love rest days is so I can catch up on shows I’m binging and not feel guilty. The Wire, Seinfeld, Friends, Stranger Things, It’s Always Sunny in Philadelphia, Rick and Morty, Sherlock. Honestly I could fill up the page so probably better to ask at a session.
Favourite Music: Pretty much anything. From Kanye to Prince. From Radiohead to the Gypsy Kings. From Eric Clapton to the Midnight Juggernauts. You get the picture – it all depends on my mood.
Favourite Food: Pizza, dumplings, lasagne, poached eggs on sourdough, Cheezels and any ice cream.
Favourite Drink: Water. I do like trying new craft brews and I’ve been building up a good whiskey collection for a little while. Soy Piccolo is my coffee order of choice.
Favourite Event: Running: Melbourne Marathon. Non-Running: AFL Grand Final, Superbowl (who doesn’t love Tom Brady being there every second year?), NBA Finals.
Dream Occupation: NBA player, astronaut or fighter pilot. Would settle on being a professional athlete though.
Most admired athlete:
· Someone I know: My sister. She started riding to work a few years back and now puts me to shame on the bike. Definitely admire how much dedication she has and the positive things she continues to do for women’s cycling through Rapha.
· Someone I don’t: Killian Jornet, LeBron James and Tom Brady.
Little known fact about me: I have a Harry Potter tattoo. I’m a perfectionist to my own detriment (just ask JC how long he’s been waiting for this).
Life Highlight: Hopefully the best is yet to come but at the moment I would include:
· Going to the NBA Playoffs and watching LeBron/Wade/Bosh battle Pierce/Garnett/Allen/Rondo
· Working in the UK after dedicating a lot of time and effort to put myself in the position to get a role there
· bungee jumping, canyoning and sky diving in Interlaken, Switzerland
Life low-point: The level of pressure I allowed myself to be put under to make working in the UK a success. Eventually I realised the only reason I was still there and suffering through the 14-18 hour work days, mental stress, and impact on my relationships was because I was worried other people would view coming back as a failure. Letting go of that feeling was the best decision I’ve ever made. Loved the time there. Hated the work.
Three Things You Want To Do Before You Die: Travel to space, learn a language fluently (preferably Spanish so if there’s anyone willing to teach …), and the third is yet to be determined.
Favourite Quote:
· “These are my new shoes. They’re good shoes. They won’t make you rich like me, they won’t make you rebound like me, they definitely won’t make you handsome like me. They’ll only make you have shoes like me. That’s it.” – Charles Barkley
· “It’s supposed to be hard. If it were easy, everyone would do it”.
· “A smooth sea never made a skilled sailor.” – Franklin D. Roosevelt
· “Everyone has a plan till they get punched in the mouth” – Mike Tyson.