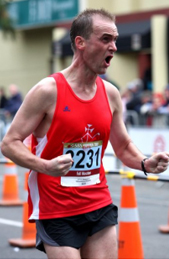 Nickname: AL
Vital statistics (12/2012): Age: 43, Height: 183cm, Weight: hmmmm, slightly more than 72/73 kg…let’s say 75 kg
Family: Married to Kylie, with 2 girls (Georgia 12 & Elissa 9)
Interests outside running: Up until 1996 it was tennis, tennis, tennis!!! After my retirement from tennis I have played some basketball and a fair bit of golf. Basically any sport is good sport.
Spending time with the family.
The mighty (or not so mighty) TIGES!!!
Good meals and good wine.
Beachside holidays
Why I started running: After spending time in a good paddock after retirement from tennis, my weight went out to about the mid 80’s. I basically started running in about 2000 to get a bit of fitness back and lose some weight.
First joined the Midday Milers: About mid 2002
Most admired sportsperson: There are many, but one Aussie that comes to mind for longevity in his sport and humility would be Andrew Gaze. He is also giving plenty back to the sport which gave him heaps.
Running highlight: 2 come to mind. Oxfam 2009 was a massive highlight because it was a massive unknown challenge that the 4 of us shared. Plus we did OK as well. Christchurch marathon 2008 was also awesome. Getting under 2:40 was at the absolute top of my expectations pre-race, and to share it with a few mates that also ran great on the day topped it off.
Running lowlight: The last 18 months has been pretty ordinary in a running sense. Injury plus a massive struggle to find any form has been a challenge. Narrowly being beaten by a pure toe runner at Burnley would rank right up there.
Favourite running shoe: Adizero Adios
Favourite area for training: Midweek: The tan. Weekend: The Dandenongs
PB’S: The Tan: 12:16, 5km: 15:51, 10 km: 33:04, Half marathon: 74:29, Marathon: 2:39:06
Other PB’S: 1500m: 4:19, 3000m: 9:07, Oxfam: 10hrs 29 mins
Best performance ever: For me personally the best block of running was the 3000m & 5000m PBs a week apart. The 3000m was the best run I have ever had and I am a mile off that at present.
Any pre-race superstitions: After my shortened race at Brimbank Park on 31/07/10, it is to keep at least 1m apart from Mitho at all times.
Favourite food: Hard to beat a good meal of Fish & Chips
Dream occupation: Professional Golf caddie. Pro golfer would be better but that would just be fantasy.
How do you prepare for a race: Light run the day before. 2 to 3 km warm up and a few strides on the day of the race. I try to eat a light meal about 2 hours before I race.
A little known fact about you: When I was about 16/17 I lined up against Wayne Arthurs in the Vic hardcourt championships. Down a set and 4-1 in the second, I fought back to win the second set in a tie break and the third set 7-5. I never played him in singles after that tournament. I own him. It is probably fair to say however that Wayne went on to slightly bigger things in tennis than I did.