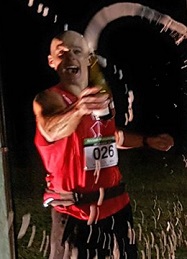 Nickname: “Courts”. Think “the band Courtney Love played in” and then think about my last name.  It also gels nicely with my occupation.
Workplace: Barrister at Victorian Bar.
PB’s: The Mile 5:19, 5km 17:55, Tan 13:47, 10km 38:40, Half Marathon 1:22:47, Marathon 3:06:25 (2013 and 2016 — yes, the exact same time twice! One with no long runs at all and the other with proper amounts of training).
Best Running Experiences: Oxfam 2016 and any marathon where I do not have a firm time in mind (eg ones I have not trained for, which means all trail runs to date, or have been carrying injuries for –— I just have a hit out and enjoy the day).
Worst Running Experience: Melbourne Marathon (2016) which was a sub-3 hour attempt. All that great training with Bevo and others, a great PB Half Marathon in the lead-up and equalled my previous marathon PB  (2013) which was done off no training (but the earlier one was expressly without any attempt to go sub-3 hours).  On the upside, it could have been slower and I did not do myself an injury.
Racing Shoes: Really lightweight shows with slightly more flex and moulding than racing flats. 6-7 ounces, if I can find them.  I have no real brand loyalty but the New Balance 1400v3’s and 1500v1’s were great shoes.  I have done Two Bays 56km and Oxfam in the same pair of 1400v3’s.
Training Shoes: See above.
Years Running: With the Miler, since 2014. Generally, my first marathon was Melbourne Marathon in 2007.  The next was in 2010 and I have done usually a couple a year since then.
Why Do You Run: The longer stuff, particularly the distance events, make me feel magic — you cannot wipe the grin off my face for days afterwards. Running makes me feel physically and mentally grounded.  Some of my best ideas for work (or for life generally) come to me when I run.  I also used to ride — kids and time constraints generally make jogging the best way to get that natural, exercised calm.  I cannot stand riding now.
Favourite Training Session: Telford Fartlek (I like the slower resting segments and can put in harder than in other Fartleks), descending set (I love the last 250m dash), any efforts at all.
Most hated session (read “exactly what I need” — thanks, Bevo): 8km progressive tempo.
Hobbies: Rock climbing, in and outdoor (much less outdoor climbing since the kids arrived).
Most Important Thing To Me: Family, friends and exercise (or anything else) which gets you to that special place.
Biggest Dislike: Those dudes who are somehow way out in front at the start of distance events, gasping and about to pass out, but still crowding out people who are likely to stay within a minute of their min/km starting pace the whole way through. I would like to know how they manage to appear out in front, scientifically speaking, though.
Favourite Movies: Blade Runner, The Big Lebowski and Dr Strangelove.
Favourite Music: Faith No More, gangsta hip hop, Prodigy, Pink Floyd, Bob Marley, Rammstein.
Favourite Food: Italian (pasta, carpaccio), Russian (blini — savoury pancakes), Japanese (sashimi) — listing more may water down the meaning of the word “favourite”…
Favourite Drink: Coffee, wine and beer.
Favourite Event: In terms of non-Miler events which I have done more than once, Two Bays 56km — a great setting and awesome crowd support. For Miler events, the mile is right up there.
Dream Occupation: Will let you know when I know what that is. Being a barrister is certainly great when it is great.
Little known fact about me: I studied Russian Language for 3 years at university and have travelled to Russia (and several ex-Soviet countries, including along the Silk Road), and studied Russian there.
Life Highlight: Arrival of my kids.
Running Highlight: Oxfam (2016) — first team over the finish line, third team on overall time — with Fitter, Duff and Bermuda. Great team effort and a really lovely run.  They also gave us champagne to spray which was a real buzz.  Gold.
Life low-point: Falling while rock climbing and seriously injuring my ankle in 2008. I was back climbing and running, probably ill-advisedly quickly.  It was a big scare and had flare ups for years afterwards.  Having been told not to run any more, I took the sensible step of finding a doctor who told me that running may or may not destroy it (and rashly believing her and listening just to the “not destroy” bit).  The ankle has done eleven marathons and an Oxfam since the injury.
Three Things You Want To Do Before You Die: Maybe another Oxfam. I reckon an international marathon or a longer trail run would be good too.
Favourite Quote: I am definitely not hard enough to be quoting this one but it is a great one and always makes me smile because of its many levels: “Make friends with pain, and you will never be alone” — Ken Chlouber, Colorado miner and creator of the Leadville Trail 100 mile race. Otherwise, most of the dialogue in The Big Lebowski.