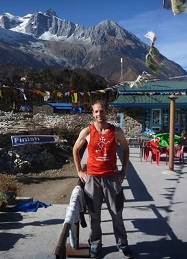 Nickname: 700
PB’s: 5km 16:51, 10km 36:44, Half 1:18:13, Marathon 2:46:44.
Best Running Experiences: So many!
– Winning a hilly half marathon two years in a row. The second win was by 5 seconds with my extended family there to watch.
– Tarawera ultra in NZ,
– Manaslu Mountain 9 day stage race in Nepal,
– Rio marathon,
– first sub-3 marathon, and
– TNF 100k.
Worst Running Experience: No such thing. I got lost in a 24k race at Lake Mountain while I was in the lead. I ran 36k, ran out of energy, fell over and cramped up. Even while I was laying there face down cramping, I still felt lucky to be outside running (sort of).
Work: Victorian Building Authority, Lawyer.
Racing Shoes: I am truly out of my depth in this conversation. I wear the same Mizuno clodhoppers I always have. In my first race (Run 4 the Kids 2007) I wore jeans.
Years Running: First marathon in 2009. With the Milers, since 2013. Real running only starts when you join the Milers. The 2016 Melbourne Marathon will be marathon number 9, I’ve also done about 12 ultras.
Why Do You Run: To lose weight originally, then you get addicted. You meet great people and have great experiences, then you start racing and you get those sweet sweet endorphins. The more you run the more endorphins you get, the more you get, the more you need to function normally! This year I want to go faster, improve my PBs over all the standard distances. Next year I’ll probably do more ultras and mountain races, I find those kinds of races very fulfilling. 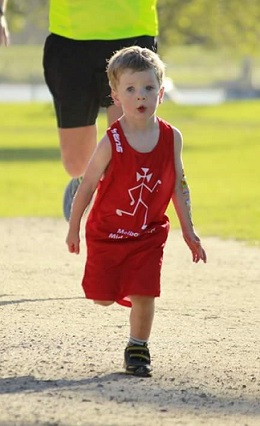 Stable: Ash “Extreme” Dalton, PB’s: 2km non-stop (holding hands).
Favourite Training Session: Tempos on the track. Or SLRs with a long tempo or fast kick at the end.
Most hated session: Mona Fartlek. I don’t understand it.
Hobbies: Uh, running I guess. I used to do a bit of mountain biking, but now if I’m somewhere good for riding I’d rather run it. I still hike a bit, but only so I can explore wild places with friends and family (when my kids start running trails, that will probably replace hiking).
Goals: To knock off a few Milers’ PB’s (you know who you are – I’m coming for you!); make an Australian team in some obscure distance event; to run with my kids.
Most admired athlete: Walter Lindrum (yep, seriously, 57 World records, and probably not on drugs).
Little known fact about me: I used to do backflips off things whenever I got drunk. I was known as Extreme Rob.
Three Races You Want To Do Before You Die: a big international point to point 100 mile race. Cradle Mountain Ultra, and my 10th Melbourne Marathon (not up to that yet, but some day).
Favourite Quotes: