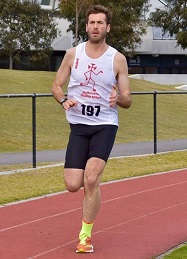 Nickname: Woodsy, Tay-Tay, Knock on
Workplace: Lawyer, owner of Ghost Media, host of BetEasy’s Golden Goal
PBs: Sometimes I run fast, sometimes I run slow. Time doesn’t bother me too much 🙂
Best Running Experience: OXFAM with Marty, Fitter and Courts, running into work on the Bayside Bus with Marty, Eric, Dan and Flynny, Gold Coast Marathon with Dan and Marty.
Worst Running Experience:
1. When I was racing triathlon I’d just got back from Hawaii in really good form. I went to race in Shepparton and was up against a cracking field. I biked up to the front of the race and was heading into transition where the volunteer told me to ‘keep going’. He should have realised that the leaders were coming into transition. I kept rolling for a couple of minutes looking for the transition entry. Turned around after a few minutes and the race was over.
2. Anytime Marty brings out his music trivia.
Racing Shoes: Saucony Kinvara for all distances.
Years Running: 6 in triathlon; 5 in running
Why Do You Run: Good for my mental health, friendship, if you run back to the office with Courts he buys you a pineapple coconut gatorade.
Favourite Training Session: A full Bayside Bus is good for the soul particularly when we get Flynny down, an ‘interpretative’ river run at lunchtime where the pace slowly gets quicker even though we promised Courts we would be taking it easy, 10x500s on the track, Two Bays training.
I love that general feeling when it’s sunny and there are a heap of Milers running and laughing at the track and you look around and think ‘You know what? This is pretty bloody good.’
Favourite Film: Captain Fantastic
Favourite TV Shows: Derek, Brooklyn 99, Broadchurch, Manhunt: Unabomber, Rake
Music I Listen To When I Run: Drake, The XX, ABBA, Fleetwood Mac, Kanye West, Taylor Swift, Florence and the Machine
Most Important Thing To Me: Family. Friends. Reminding Marty that the only record he holds at the Milers is in the obscure 100 miler category.
Biggest Dislike: People who can’t laugh at themselves, sick people on the train.
Favourite Food: Burgers, ice-cream, sweet potato chips, chocolate
Favourite Event: Sandy Point Half, Hawaii Ironman
Dream Occupation: CEO of a major sporting club
Chances Of Marrying Taylor Swift: I’d say 30% chance. I’m not ruling it out. I think the fact we haven’t met yet is holding me back.
Little Known Fact About Me: I’ll be competing in UltraMan Australia next year. A three day event comprising a 10km swim/146km ride on day one, 274km ride on day two and a double marathon on day three.
Things You Want To Do Before You Die: UltraMan, watch an EPL and Champions League match, go to a FIFA World Cup, represent Australia in age group triathlon/duathlon, go to an NFL game with my dad.
Favourite Quote: Probably from an electrician who offered a good price installing some televisions on the wall.
Favourite Actual Quote: To give anything less than your best is to sacrifice the gift.