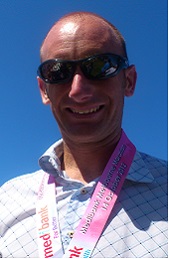 Nickname: Woolies
Vital statistics (2013): Born: Yes, Height: 180 cm, Weight: 68 kg
Family: Wife: Roz, Kids: Emma, James and Jasper
Interests outside running: Playing with kids, Travel.
Why I started running: I’ve got legs, I know how to use them.
First joined the Midday Milers: January 2009.
Running highlight: Debut marathon at Melbourne 2012 (2:36:38).
Sporting lowlight: Giving up on becoming an international middle distance runner. Decided to take a year out and travel around Australia.
Favourite running shoe: Adidas Feather.
Favourite area for training: Ferny Creek.
Strangest place to run: In Tangshan, China installing a gauge on a steel mill where its -20C outside and so cold inside the Mill that the cooling water next to the gauge had formed an ice block around the fire extinguisher. The locals had probably never seen a white guy, especially not one in lycra tights (2 pairs), Jacket, Beanie and gloves, Running around the streets like its normal.
Most dangerous place to run: In Columbia at 2400m on a secured compound where I was installing another gauge, running up into the quarry as I wasn’t allowed to leave the compound. With great big dump trucks passing me and climbing up to about 3000m in altitude.
PB’s: Tan: 11:46, 5 km: 15:18, 10 km: 32:40, Half marathon: 72:05, Marathon: 2:36:38.
Any pre-race superstitions: Don’t drink alcohol the night before a race. Like Pringles. Once I pop I can’t stop .
Most admired sportsperson: Steve Ovett.
Favourite food: Asian (But not Japanese due to a bad experience when over there for work).
Favourite drink: Snake bite and black (Half lager, half cider and dash of blackcurrant cordial).
Favourite movie: Aliens (Love science fiction and love space).
Dream occupation: SAS. It’s also a life regret that I never got into the army. Can’t do it now with a family, as I couldn’t put them through it.
A little known fact about you: I have ran on every continent apart from Antarctica.
Three things on your bucket list: Visit the jungle in Costa Rica, Sub 2:30 marathon, Visit Antarctica and go for a run.
Most important thing to me: My family.